This gluten-free Sausage & Apple Stuffing is baked to perfection with savory Italian sausage, tart apples, cranberries, and seasonings for a crowd-pleasing side dish to roasted turkey.

For the gluten-free bread cubes:

To use as stuffing in a turkey: 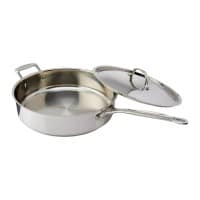 Skip the toasting step if you are using store-bought gluten-free bread cubes that are already crisp and toasted.