Want to make a quick and delicious chicken recipe for dinner? This recipe for cast iron skillet chicken breasts is one you’ll be making for years to come. The result is perfectly seared on the outside and juicy chicken at every bite.

If you are new to cooking with cast iron, this recipe includes step-by-step instructions and tips to help you make great-tasting chicken without it sticking to the bottom or burning.

There’s a reason your grandmother swears by cooking meat on the cast-iron skillet she’s been using since before we were born. Not only does a well seasoned cast-iron skillet make food taste better, but it’s also known to distribute heat very well which is perfect for evenly cooking just about anything; steaks, golden cornbread, biscuits, roasted vegetables, and chicken!

In this post, our focus is on juicy, seared chicken breasts. Albeit this is a no-frills recipe, with the simplest of seasonings it will yield flavorful chicken every single time.

The idea is to get you cooking the chicken NOW instead of heading to the store for spices or browsing the web for a recipe with ingredients you have on hand.

We all need more of those simple and delicious family meals that are quick to assemble.

When done correctly, chicken breasts cooked in a well-seasoned cast-iron skillet have a perfect bronze sear across the surface and rich flavor in every bite.

This is because cast-iron skillets are #1 at even heat convection and, depending on how often you cook with yours, very well seasoned.

What does “well seasoned” mean?
The term “well seasoned” implies when oil is baked or cooked into the cast iron surface. It’s what makes the material an easy-release cooking surface.

Essentially, every time you heat oil in your cast-iron skillet, you add another layer of ‘seasoning’ and, thus, create better-tasting food!

If you cook chicken a few nights a week and want to try new recipes that guarantee tasty results, check out the Chicken. It’s What’s for Dinner eBook.

It has over 70 chicken recipes, including pasta, sheet pan dinners, soups, and slow cooker meals, along with a guide on the best ways to cook every cut of chicken.

The ingredients to make flavorful seared chicken are simple. Here’s everything you’ll need to make this recipe:

How to Cook Chicken Breasts in a Cast Iron Skillet

This is the part where we perfect the art of cooking chicken breasts in a cast-iron skillet. Follow the directions below, and you can guarantee the tastiest cooked chicken ever.

How Long to Cook Chicken in a Cast Iron Skillet

Cast iron skillets are extremely efficient at even heat convection which means chicken and other foods will cook faster. You can estimate about 6 to 7 minutes per side and even less time if you are cooking with smaller fillets or using butterflied chicken breasts.

However, for the meat to be juicy and tender, it’s important to cook chicken according to temperature and not time. White meat chicken is done cooking at an internal temperature of 165F.

When to Flip Chicken on a Cast Iron Skillet

Once you add the chicken to the skillet, it’s important to let the chicken cook long enough, so the edges develop that rich golden sear. Give it 5 to 7 minutes to cook before flipping.

If you try to flip them too soon, the chicken WILL stick to the skillet.

You’ll know it’s ready to be flipped when the side of the chicken facing you has an opaque rim around the edges, and the cooked side easily releases from the skillet’s surface.

Does Chicken Stick to Cast Iron?

Cast-iron cookware is considered non-stick, but it still needs to be greased with oil, especially if your skillet is new. This will prevent the chicken from sticking to the surface and add another layer of ‘seasoning.’

1 to 2 tablespoons of oil is the sweet spot; we aren’t frying chicken.

Over the years, you may find yourself needing to use less oil, but for now, apply it once the skillet is heated. I prefer to use oil when it comes to searing chicken because:

a) It’s thick enough to coat the rough surface of the skillet.
b) It has a high smoke point which means you can cook foods at a higher temperature without burning, unlike butter and coconut oil.

This is where a meat thermometer comes in handy! No matter what vessel you use, chicken is fully cooked when it reaches an internal temperature of 165F for white meat and 175F for dark meat. Read more about how to know when chicken is done cooking with and without a meat thermometer here.

You can serve the chicken with one of the comfort-food sides below, slice it for salads, or roll it up into a wrap for lunch. I’ll let you decide. 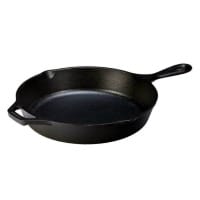