This sausage apple stuffing is one of my most anticipated dishes of the holiday season, and after one bite, you’ll see why.

Fresh leeks, apples, and cranberries are cooked down into golden brown goodness, then baked to perfection with Italian sausage and bread. The bread soaks up all the flavors and creates one delicious companion for roasted turkey.

It’s savory-sweet and has just the right amount of spice from the Italian sausage and rosemary.

Below, you’ll find the full recipe along with everything you need to know to make the best homemade bread stuffing each year.

Leeks in stuffing? Yes, while it’s not typical, just trust me. They cook down in the sausage drippings and add a caramelized flavor and hearty texture to the stuffing.

Here’s a complete list of what you’ll need to make cranberry apple stuffing:

What’s the Best Bread for Stuffing

Over the years, I’ve made this recipe with several varieties, and I’ve found the best bread for stuffing is soft and dense with as few air pockets as possible. Great options are:

And if you are curious, density applies to the texture of the bread. In this case, it means the “pores” are small, which is important for stuffing because there is more bread to soak up all the flavors and cooking juices.

How to Prepare Bread for Stuffing

Before we start, I want to point out that pre-baking the bread cubes in an oven prevent the stuffing from turning out soggy. I don’t recommend skipping this step. Of course, you can do this step up to 2 days ahead and store the cubes in an airtight container.

There are two ways to serve this sausage stuffing. You can bake it inside the turkey OR in a greased baking dish. Below I show you how to prepare it both ways.

But before you read the step-by-step, check out this recipe video where I walk you through the entire process.

Toast the bread
Preheat the oven to 300F. Spread the bread cubes in an even layer onto the baking sheet. Bake for 10 minutes or until lightly golden. Remove from the oven and set aside.

Brown the meat
Remove the sausage from its casing and add it to a large skillet. Cook the sausage over medium-high heat for 10 minutes, breaking up the meat with a spatula as it browns.

Remove the sausage from the skillet with a slotted spoon and transfer it to a plate. Keep the drippings in the pan. This will add flavor.

Add the veggies
To the same skillet, add the leeks, apples, celery, and poultry seasoning. Cook until the leeks are softened and golden brown.

Combine everything
Stir in the cranberries, cooked sausage, and bread cubes. Season with salt and black pepper, and toss to combine before adding the chicken broth.

*Please note, the stuffing is supposed to appear wet and soggy, but as it bakes, the moisture will evaporate, and the mixture will become more cohesive. By the end of baking, it should have a golden-brown crust on top.

Stuff the turkey
If you are going the traditional stuffed turkey route, stuff the bird with 5-6 cups, about 1 cup per 3 lbs. Tie the legs and roast as directed. Depending on the size of the turkey, you should cook the turkey until the thigh reads at 175 degrees and the stuffing reaches 165F.

Bake in a baking dish
If you prefer to bake dressing separate from the turkey, simply add it to a greased baking dish, cover with foil, and bake at 350F for 45 minutes. Remove the foil and bake for an additional 15 minutes until the top is golden brown.

Stuffing is one of the best parts of Thanksgiving and this recipe is a favorite recipe from my Giving Thanks eBook. You’ll find it along with 22 other mouthwatering dishes to choose from for an incredible holiday feast.

This digital download is like hiring a kitchen assistant to plan out an incredibly delicious menu for your family.

How to Make Stuffing Ahead

You can easily make this sausage and apple stuffing ahead of time! Prepare it as directed, but don’t bake it. Transfer it to a large bowl or baking dish, cover tightly, and refrigerate for up to 48 hours.

To bake, remove it from the fridge at least 30 minutes before baking. Bake as directed.

Now that you have a delicious stuffing recipe, are you ready to make your Thanksgiving menu complete? I have no shortage of delicious, crowd-pleasing recipe you can serve to your guests.

P.S- this savory apple stuffing is the bomb with that Orange & Port Cranberry Sauce. I could easily fill my plate with these two dishes and be perfectly happy. For the Bread Cubes:

To use as stuffing in a turkey: 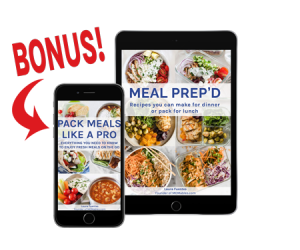 Skip the toasting step if you are using store-bought bread cubes that are already crisp and toasted.