If you’re looking for New Orleans recipes you can make at home, you’ve come to the right place!

After living just 45 minutes from the Big Easy since 2000, I’ve accumulated a tasty collection of authentic New Orleans recipes from friends, family, and locals- all of which I am sharing with you today.

Below you will find quintessential New Orleans-style food and traditional Cajun and Creole recipes that are as much of the backbone of New Orleans as the Mississippi River.

All of them have been tested and adapted by me so that you can easily make them from the comfort of your kitchen while knowing you are getting the real deal.

Let’s get into it!

Can’t wait to skip ahead? Click below to jump straight to the recipes, by category of New Orleans flavor!

What are New Orleans Famous Foods

So what are the most famous New Orleans foods and ones you MUST try when visiting? Great question!

The most famous foods in New Orleans are known for their robust flavors from spices, seafood, rich sauces, and local ingredients. Gumbo, Jambalaya, and etouffee are perfect examples.

There are many restaurants and hole-in-the-wall eateries that dish out some of the best gumbos and creole dishes you’ll ever try.

There’s also the tradition of beignets and cafe au lait at Café du Monde, basically the New Orleans version of donuts and coffee.

Beignets are fried squares of dough that turn into pillowy-soft rectangles dusted with powdered sugar. One tip for eating them, don’t inhale when you take a bite. The powdered sugar will go everywhere.

A café au lait is a blend of coffee and chicory with plenty of milk. It’s rich, bold, and the perfect cup to start your day.

These are only a few examples of the most iconic New Orleans foods, and below you’ll find the recipes for some of them, along with other popular dishes.

Dying to skip ahead?

These authentic New Orleans recipes are ones I’ve learned while living here. Most of them blend Cajun, Creole, and Southern cooking styles and are very popular during holidays like Mardi Gras and festivals. Pork roasted with a blend of Creole spices until fall-apart tender. Since the original recipe involves a fire pit, I adapted it to make it in the slow cooker. Finely shaved iced infused with your choice of fruit-flavored syrups, it’s the perfect cold treat for hot Louisiana summer. Some ‘sno-balls’ even have ice cream in the center. 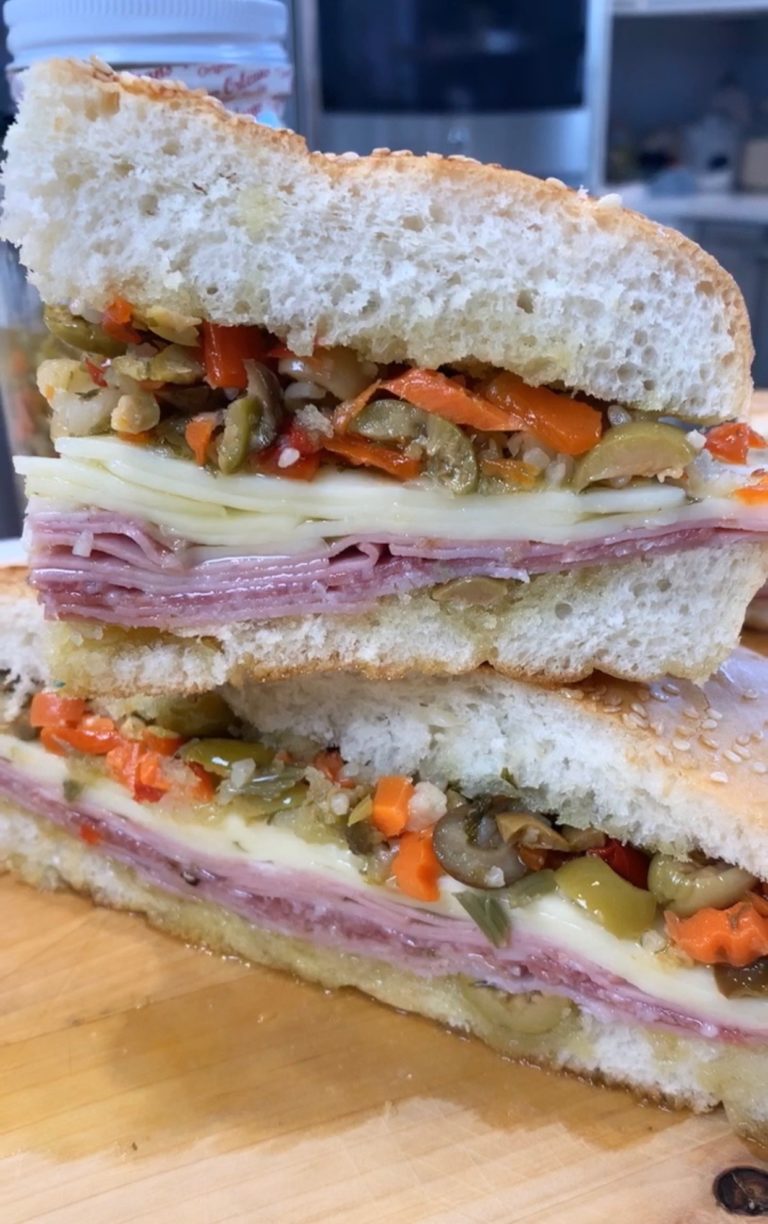 A famous New Orleans deli sandwich made with Italian cold cuts, cheese, and olive salad. The one from Central Grocery in the French Quarter is the bomb! Whitefish seasoned with spices and cooked until the exterior is crispy or ‘blackened’ and the center is fork-tender. Served in tortillas with slaw and usually a creamy dressing. A Mardi Gras tradition that involves a filled pastry dough that’s shaped in an oval, baked, iced, and topped with sprinkles in the Mardi Gras colors of purple, gold, and green. A handheld pie made with a buttery crust and filled with seasoned rice and crawfish filling. These are super popular at Jazzfest! Fresh french bread filled with a cheesy and creamy crawfish sauce and baked until golden.

A New Orleans café au lait is made with coffee and chicory, a blend of coffee that’s brewed with chicory root. It’s brewed strong then served with hot milk for a robust cup. This is similar to chicken schnitzel but breaded with a seasoned Parmesan crust and pan-fried.

Not all New Orleans recipes are Cajun or Creole-based; many are unique to the culture of New Orleans. Below is a list of the most notable dishes you can only get in New Orleans; I guess you’ll have to visit!

Now, we have more recipes coming, but before we get into that, allow me briefly discuss the difference between Creole and Cajun cuisine.

Whether you’ve been to New Orleans or have heard plenty about its incredible food scene, you have probably heard the terms: “cajun” and “creole” tossed around. While many recipes (*ahem- unauthentic recipes) use the terms interchangeably, they are different.

Originally, Creole cooking originated in urban New Orleans from the blend of African, European, and even Native American cultures. Most traditional Creole ingredients like tomatoes, herbs, spices, and butter were popular and used because of their easy accessibility from the city’s ports.

On the other hand, Cajun dishes originate from rural Southern Louisiana regions and involve more simple ingredients like smoked meats, spices, and rice, a prominent part of Louisiana’s agriculture. It evolved from Canadian French and Southern cuisines, and it’s still going strong.

Today, both forms of cuisine are the most notable and delicious aspects of New Orleans and ones that I am happy to share with you.

As previously mentioned, Creole recipes are easily identified by their use of fragrant herbs, rich sauces, and seafood- basically the description of etouffee. Many recipes will use the “Holy Trinity,” or a blend of onions, celery, and bell peppers to add delicious flavor and aroma.

Ready to try a Creole recipe? These dishes will make a great start! A one-pot style recipe with rice, vegetables, chicken, and sausage. This is a Creole take on Jambalaya since it uses tomatoes. Summer in Louisiana brings an abundance of Creole tomatoes and this salad brings out their fresh and sweet flavor. A seafood dish made with shrimp or crawfish in a rich tomato and butter-based sauce. It’s served over rice and something you will certainly want to try if you visit the city. A blend of spices and herbs like thyme, basil, and oregano. It is used in sauces, salad dressing, gumbo, and even a dry rub for fish, chicken, and pork. Consider it a staple for every Louisiana pantry.

A quick note on the difference between Creole and Cajun seasoning; Creole seasoning uses a blend of spices and herbs like thyme, oregano, bay leaves, and paprika while Cajun seasoning is an array of ground black, white, and cayenne pepper with minimal herbs. They are similar in flavor but Cajun seasoning tends to be spicier.

While the recipes above are traditional Creole dishes, the ones below are more personal adaptations inspired by the same spices and ingredients. Nonetheless, I guarantee they are absolutely delicious and will be family favorites. This recipe uses cauliflower rice for a lightened-up and low-carb version of the classic recipe. A creamy pasta dish made with andouille, which is smoked pork sausage. It’s simple, hearty, and a kid-approved dinner. 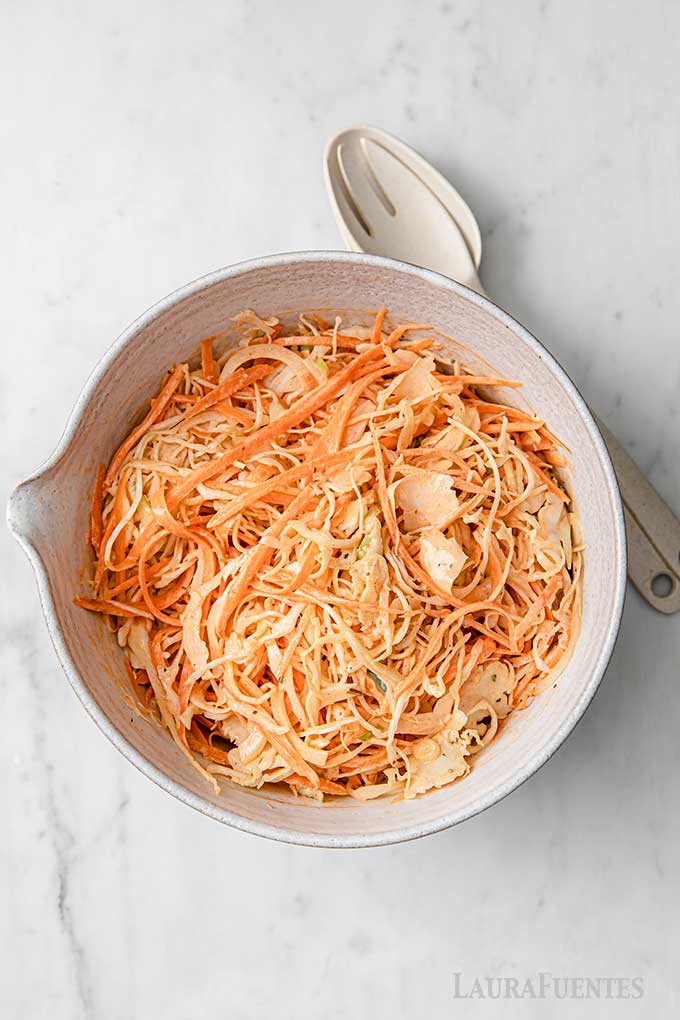 Classic coleslaw but the dressing includes Creole seasonings and Creole mustard, which can be found on Amazon if it’s not available at your local grocery store. This recipe goes great with Cochon de Lait. Originally, this recipe is made with a lot of butter and cream, but I decided to lighten it up without sacrificing flavor. If you don’t have crawfish in your area, use shrimp. Baked instead of fried and perfectly seasoned with, you guessed it, Creole seasoning.

Cajun recipes are known for their simplicity and hearty flavor. Cajun cooking can be done in one pot and feed a crowd, which is part of the reason why dishes like gumbo and Jambalaya are MAJOR during holidays and celebrations.

Below are some of the most amazing and drool-worthy Cajun recipes: The #1 New Orleans-style gumbo that you can easily make at home. It’s a Cajun-based recipe, and I show you step-by-step how to make the perfect roux with flour and oil for a robust and flavorful bowl of gumbo. Tender and flaky catfish coated in a golden, crispy crust- this will be one of the tastiest pieces of fish you’ll ever eat. Cooked pasta and fresh bell pepper tossed in a simple dressing. While it’s not a traditional Cajun recipe, it’s light, simple, and has the flavors of Jambalaya.

While there is a similarity in the use of spices in Cajun and Creole recipes, two major distinctions between a Creole and Cajun recipe is the presence or absence of butter and tomatoes.

As previously discussed, Creole recipes use butter and tomatoes, while Cajun recipes use oil and a more simple ingredient list. This sets apart the light Creole-based gumbos from dark and earthy Cajun gumbo.

The former will involve a butter-based roux and tomatoes, while the latter, a Cajun gumbo, uses an oil-based roux. A perfect and very tasty example is provided in the recipe card below. From Jambalaya to Gumbo, in this post, you’ll find many traditional New Orleans recipes that are flavorful and easy to make no matter where you live.

You can use vegetable oil, duck fat, bacon fat, or lard to make a roux. Margarine is not an option for this!

While not required to make a great gumbo, File powder adds that authentic New Orleans flavor and helps thicken the gumbo.

If you want to add okra to this gumbo, omit the file powder. You can add ½ cup thickly sliced okra to the pot when adding the onions, celery, and pepper so it can cook down with the vegetables.